Staff from across University Hospital Monklands finally switched their pagers off in 2019 and picked up their D63 and Myco DECT smartphones from Ascom – enabling them to send instant text alerts and communicate more easily, instead of relying on pagers that interrupt patient care. 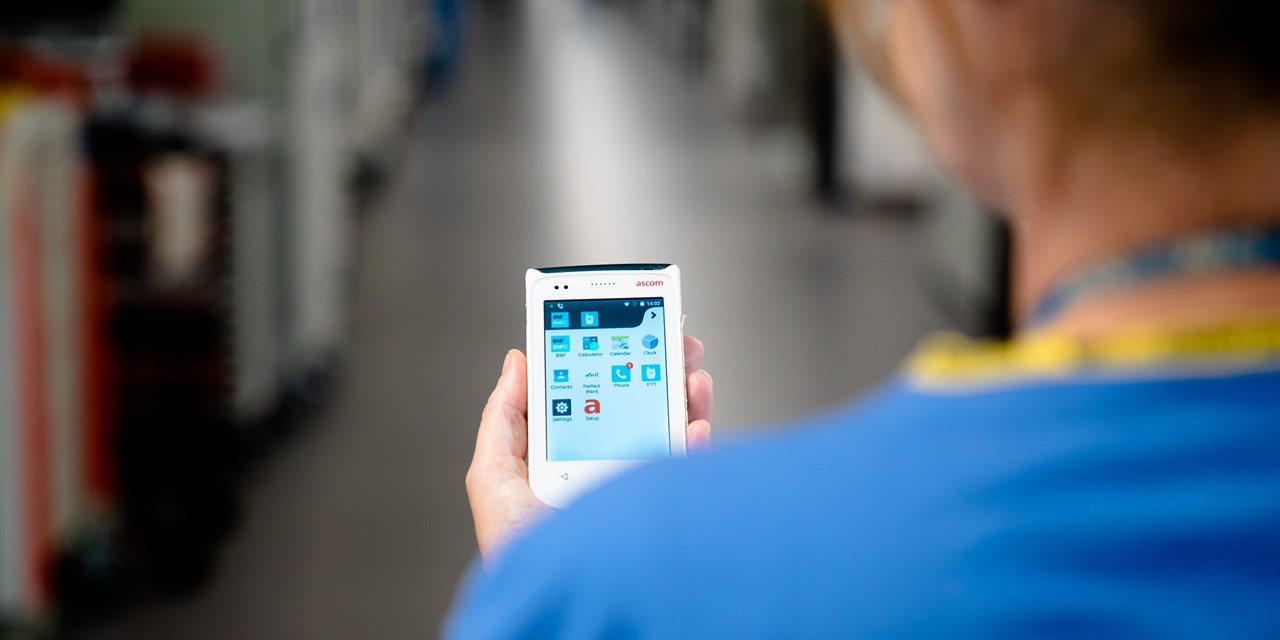 The project was part of a wider upgrade to unified communications for NHS Lanarkshire. Advanced nurse practitioner Heather Liddell said: “The smartphones have meant the end of constant interruptions to care. Rather than having to find a phone to answer a bleep, we can easily check texts from colleagues and finish tasks before responding. We can refer back to texts to check details rather than chasing missed calls.

“For example, I texted a doctor to check a patient’s x-ray. With a pager, he would have had to stop what he was doing to find out what I wanted. But he was able to respond in his own time. The smartphones help us prioritise our workload, which is better for us and for the patients.”

The smartphones have meant the end of constant interruptions to care.

Prior to rolling out the new smartphones, NHS Lanarkshire conducted a survey amongst its staff to find out their views on the existing communication systems and identify key areas for improvement.

With signal range identified as a key concern for staff it was important to get it right with the new smartphone system.

“We had to guarantee 100 per cent coverage, and we have achieved that with the DECT phones,” said Shane Carrier, head of telecoms at NHS Lanarkshire.

“Consultants were carrying two or three pagers, plus a DECT phone. Now they have one phone that handles all their messaging and calls. It means they are able to engage with other clinicians and patients more quickly. We also have a full audit trail if there is an incident that needs investigating, which we never had before.

“We are more than impressed. Ascom gave us what we wanted. Staff can walk anywhere in the building and not lose reception on their phones. And we have the comfort of the Ascom technical team’s support should we need it.

“We’re now at the end of the deployment and we’re looking to further enhance the solution – including expanding into other sites.”

In 2019 a report revealed that one in 10 of the world’s pagers was used by the NHS at an annual cost of £6.6m. The same report also revealed that by switching to mobile software the NHS could save an estimated £2.7m each year. (1)

Commenting on the project to transform communication at NHS Lanarkshire, James Webb, head of sales and marketing for Ascom said: “We’re delighted to hear that our work with the team at University Hospital Monklands has made so many positive changes.

“The Covid-19 pandemic highlighted the acute need for NHS staff to be able to communicate easier with their colleagues, and to do so as efficiently as possible. In a world where most people now rely upon smartphones in their personal lives, it no longer makes sense for the NHS to continue using pager technology.”